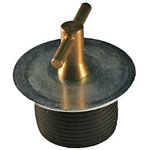 Last week,  Chad and Travis were called on a job to get an expansion plug out of a sewer line that was under a concrete floor.  The plug had broke and went down the sewer line, causing the line to back up.

Chad and Travis put one of our sewer cameras down the line to locate the plug.  Once it was located, they put the drain cable down the line and watched on the camera as the sewer cable pushed the plug further down the sewer line to a location outside of the building.  Once the plug as pushed outside, they dug up the line where they had pushed the plug, opened the line and pulled out the expansion plug.  Then they repaired the sewer line and covered it up again, saving the business from cutting up the concrete floor to find the plug.

Chad is an amazing Drain Cleaner….the Best in the Valley.  Our Drain Cleaners are Masters in their profession.

IF your sewer line keeps backing up and you don’t know why, give TVPD a call and we will solve the problem.

Service Areas in Idaho and Oregon